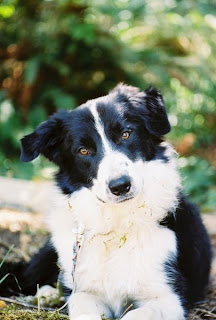 This is the story I promised you about the love of my life. His royal title was Peat Moss. His father was Moss and he came from a long line of blue blooded Border Collies. He was so important he even had a real certificate of birth, a registered name, and a very illustrious ancestry. He was one handsome hunk of canine and I fell head over paws for him.
Let me start at the beginning.

The Duchess felt I needed a companion to run with. A Court Jester to entertain me would be perfect because Sir Bear just wasn’t up to the challenge. She spent months searching for the right canine and finally, after much correspondence she chose Peat. There were many obstacles to overcome but finally we climbed into the Dukes royal carriage and drove 2 hours to meet him. I will never forget that day. I was so overcome by his presence I completely ignored him. I had to get control of myself in order to assert my position in the Castle. Bear was not impressed with him and paid little attention to what was going on. He didn’t understand that Sir Peat was to become a serious threat to his happiness.

The Duke and Duchess bonded with Peat on the spot. He was such a charmer! After a few minutes we climbed back into the royal carriage for the trip home. Bear and I were in the back, Peat was curled up between the Duke and Duchess in the front. It was an uneventful trip for everyone but me. Just being close to him made my heart race. He truly was magnificent. We came seeking a Court Jester and we left with a Knight in Shining Fur! Wow.

Over the course of the next week or so, Peat and I became soul mates. He was gentle spirited and quite noble. He could run like the wind and we spent many hours getting to know each other. When we’d race across the grounds the Duchess said it was like watching the angels dance in Heaven. I saw tears on her face several times during those first few days. Peat was such a gentleman he even let me destroy his favorite toy that he’d had since he was a puppy. He loved me and I knew it. It was hard not to let him know how much I loved him too. When you’re a Queen you must always be number one and that’s difficult when you’re in love. The Duchess said Peat was a gift from God. The day we brought him home the Duke got a phone call saying that his Mother had gone to Heaven. When they needed it most, Peat brought much joy into their otherwise sorrowful lives. 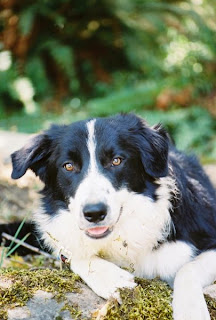 So, life was good for everyone but Sir Bear. As the days wore on he became testy when Peat and I would run together. He thought Peat was going to harm me and it was his job to protect me at all costs. I appreciate his loyalty, but it was terribly misguided when it came to Peat.

One Saturday morning the Duke left to take care of some business far, far away. The Duchess had a meeting in town and left us together in the kitchen for an hour. We had shared the kitchen all week long while the Duke and Duchess were off to work and we’d had no problems. But this morning was different. Peat and I were playing and Bear could take it no longer. He simply thought he was defending his Queen. There was a terrible fight and blood was spilled. When the Duchess arrived it was like a scene in a horror film. She became hysterical and called her son for help. They took the wounded warriors to the vet in separate carriages and left me home alone. Sir Bear came home. Peat did not. At least not right away. He needed to be sedated before all of his injuries could be attended to. This was the blackest day of our life at the castle. The Duchess cried for hours and the Duke was too far away to help. When Peat came home later that day it was obvious that the fight was not over. Bear and Peat had become sworn enemies.

Peat stayed with us for another week. It was a heartbreaking week for everyone. I finally had to take sides and I chose Bear. Not because I didn’t love Peat, but Sir Bear was clearly the winner, and so it goes.

Peat went to a nice home, but the Duchess felt that no place was good enough for him. She suffered for many months afterwards and blamed herself for everything. Of course it wasn’t her fault, but she was pretty traumatized none the less.

Bear recovered completely from his injuries, as did Peat, and life in the castle went back to normal. But the Duchess swore an oath to the Duke that there will never be another “Peat” in the castle while Sir Bear walks this earth. And that may be a very long time.
Posted by Emma Rose at 9:58 AM