Sir Bear has been giving us much grief lately.  We had a large Rubbermaid container in the kitchen that the dog kibble was stored in.  It was put in there to keep Bear out of it.  Well, he finally figured out how to open it and the very same day the Duke filled it up, Bear got into it and ate about four pounds of food.  His sides were sticking out and very hard.  The Duchess thought he would need to go to the Vet.  She was very worried about him getting Bloat.  As luck would have it, the poor guy couldn't keep it down and spent the next hour or so throwing up kibble. He was a sick guy.  In the morning he was totally uninterested in breakfast.  He didn't eat again until dinner time.  Higgins and I secretly laughed at him because he is such a glutton!

After that terrible night the Duke and Duchess began hunting for a more secure container.  They bought a clear plastic one that had latches that snapped up and over the lid to keep it on.  Ah ha!  They thought he would never be able to get into that one.


Less than a week.  Yep.  He did it again and this time ate even more than four pounds.  Labs never learn I guess.  Anyway, it was another long day and night for everyone.  After that the Duchess had to keep her bread machine on top of the dog food so Bear couldn't get into it. 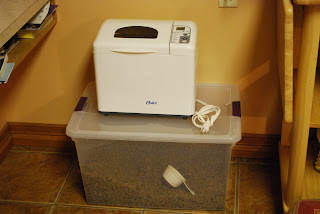 This was not a satisfactory solution at all, but everyone was stumped.  The Duchess was trying to figure out where else she could put the container, but nothing would work well.
﻿
Then she found THIS!  "Gamma's Vittle Vault". 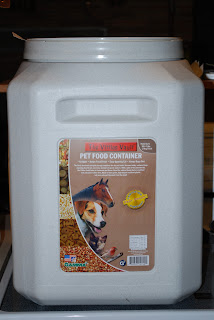 It holds over 50 pounds of food and keeps it fresh with and airtight seal. 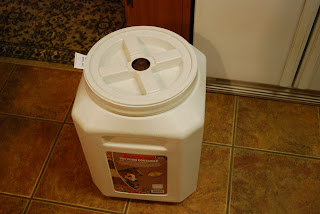 BUT, the lid screws on, it doesn't snap on.
This absolutely has to be "Sir Bear Proof"! 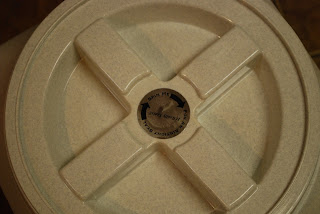 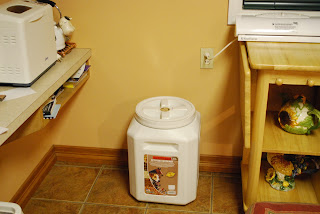 Nice....and very sturdy.  He can roll it around the kitchen,
but he'll never get it open.
Fingers and paws crossed!
Kisses,