Christmas At The Castle

On Christmas Eve, before the family arrived, the Duke and I had some quiet time to surf the web on the Duchesses laptop computer. 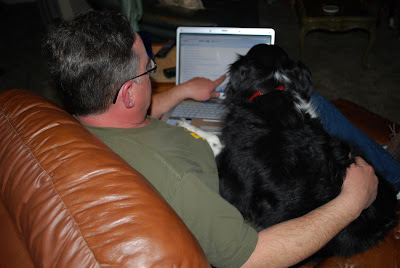 Unbeknownst to the Duchess, the Duke had secretly taken her laptop out of the castle and had some "zoom zoom" added to it. So we were checking out how fast it was working. There we sat, right under her nose and she had no clue we were checking out her Christmas present. Ha ha ha - we really pulled one over on her! (The Duke also got her the beautiful red leather laptop case she wanted!) 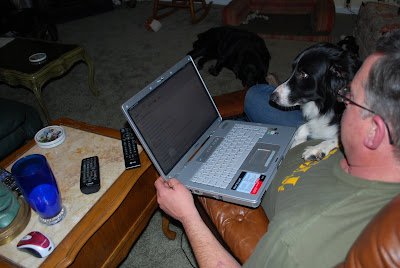 The family arrived about 7:00 in the evening and the craziness began. Mister Higgins barked and snarled at the Grand Kids so had to be crated. After things settled down he was allowed out, under close supervision, to have a calmer "meet and greet" session. He got better as the night wore on.

Christmas morning the men cooked breakfast and we were all locked out of the kitchen. 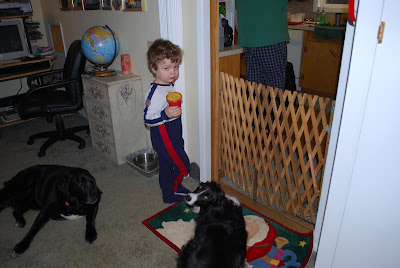 All of us, that is, except Mister Higgins (AKA The Troublemaker). He was constantly under foot, but at least the Grand Kids were safe! 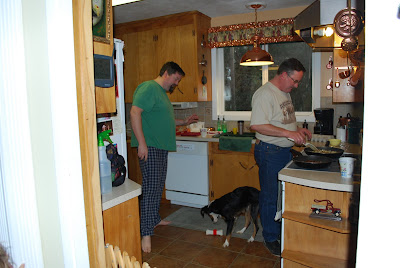 After breakfast the fun began. Everyone opened their gifts. We got toys and Mister Higgins stole every last one of them. In fact he tried to steal everyone's gifts. Even the bows! Since it was his first Christmas we can forgive him. He didn't know that there were rules. He should have known because there are always rules! 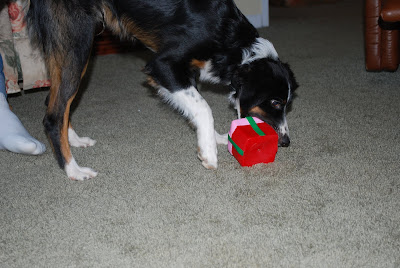 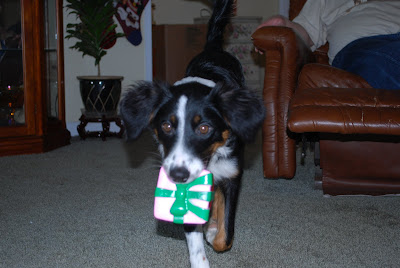 Sir Bear doesn't like Christmas very much. Too many people telling him to move out of the way. So he found a good spot to hide out where no one would bother him. 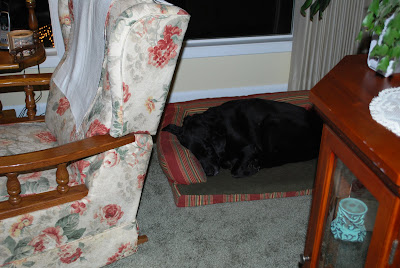 The Duke and Duchess were fully aware that Higgins was not to be trusted with the Grand Kids. He can be very reactive and the last thing they wanted was a "bite" situation. Everything was going fine and they were keeping an eye on things, when all of a sudden all "heck" broke loose. The kids had been throwing the ball down the hallway and Higgins would run to fetch it and bring it back. The Duchess had been sitting at her computer watching them play. They decided to take a break and the Duchess turned her back. Suddenly there was a blood-curdling scream from the guest room and a barking-snarling dog! The Duchess was up out of her chair and covered the 39' distance of the hallway in less than 1.5 seconds! (I never knew she could move that fast. She's been holding out on me!) Of course the Duke and the Dad were right behind her. Little Ben was trying to cover himself on the floor and Higgins was barking and snarling at him! The Duchess, terrified of course, pushed Higgins out of the way, grabbed little Ben and asked him if he was hurt - did he BITE you ?????? The answer was "No". "WERE YOU RUNNING?" The answer was "Yes". This was the "ah ha" moment. Little Ben had been repeatedly warned NOT to run. Thank goodness he was not hurt. We Border Collies are born to chase anything that runs. By this time Higgins was delighted that everyone had come to the guest room! So, as the Duchess held little Ben and comforted him, the Duke hauled the offender off to the kitchen to spend some time behind bars.
Soon all was forgiven and the play resumed. Little Ben promised not to run anymore, and the Duchess never turned her back without making sure someone else was watching. 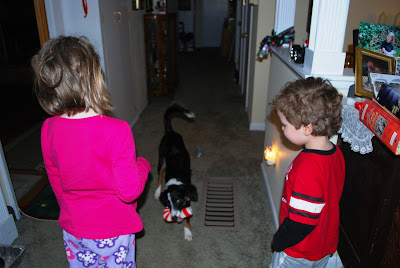 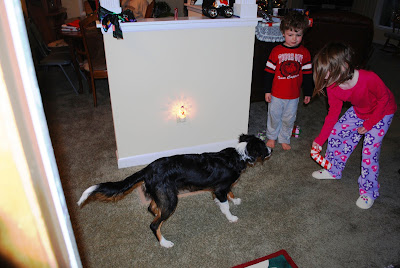 Higgins: Does this look like the face of a killer? I am the PUPPY! You must love me! 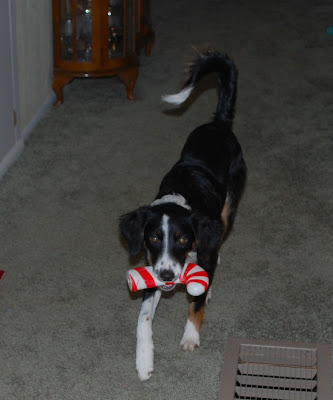 And love him, they did. Even little Ben loved him before the day was done. However, little Ben was very careful not to run! 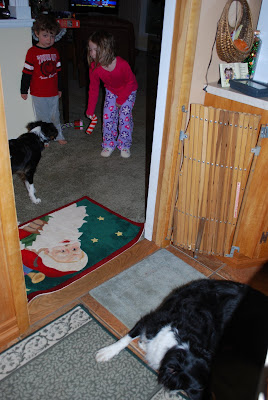 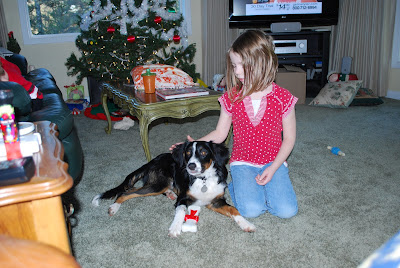 I personally am ever so thankful that Christmas is behind us. I will be so happy when Mister Higgins grows up a bit. The Duke and Duchess have doubled their resolve regarding his "training". Border Collies are supposed to be smart - but I think Higgins might be an impostor, or maybe even an alien!

I hope you and your family had a peaceful Christmas :) 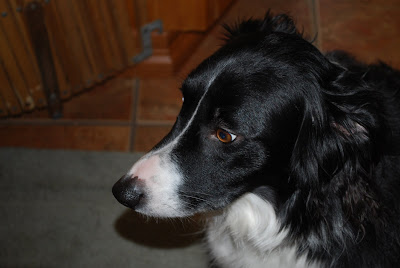