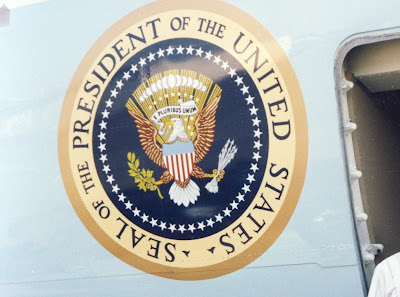 With this story I am breaking my rule about not having pictures of humans on my blog. However, the story is worth telling and sometimes you just have to bend the rules to do it right. Hope you enjoy reading it as much as I will enjoy sharing it.

The Duke’s brother Brad was a Crew Chief on Air Force One through several Presidential administrations. During a Presidential visit to the Northwest in the late 1980’s, the Duke and his family were treated to a tour of the plane. That was back when the airplane was a Boeing 707. (That plane now permanently resides in the Ronald Reagan Presidential Museum in California.) In 1990 the 707 was replaced with a gigantic Boeing 747.
Sometime around February 1993, brother Brad called and said “the President is flying to Portland, Oregon for a conference on April 1st and the plane will be on the ground overnight. How would you and your lovely new wife like to have a personal tour of Air Force One?” He went on to say that he would not be on the trip but the pilot or another of his buddies would do the honors. Now, this is a really big deal because no one boards Air Force One without a personal invitation. There are no public tours, etc… So, over the course of the next month or so, the Duke and Duchess were cleared by the FBI, CIA, and the Secret Service. The Duchess thought that was pretty exciting, and although the Duke kept trying to tell her what to expect, she couldn’t grasp the enormity of what she was about to experience.

When the day finally came, the Duke and Duchess drove to the Air National Guard Ramp at the Portland airport, showed their passes, parked their car and proceeded inside the building. After going through security, they walked out the other side of the building to a roped off section of the tarmac. A large crowd was gathering to see the arrival of President George H. W. Bush. The Duke was delighted to point things out that the Duchess would have otherwise not noticed.
For instance, the black Suburban on the tarmac is filled with every kind of weapon conceivable – just in case – 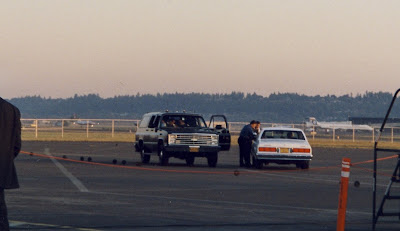 And the rooftops all around them had sharpshooters in position, watching every move on the ground and in the air. The Duchess says she would not have believed him if she hadn’t seen it with her own eyes. 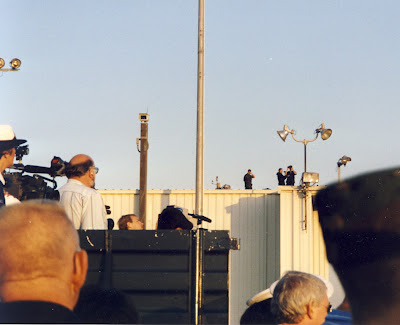 When at last the giant plane landed and the President stepped out, the Duchess was amazed at how much bigger he was in real life! (He looks so small on television) The crowd cheered and the President waved as he made his way down the steps to the waiting dignitaries and Air Force personnel. 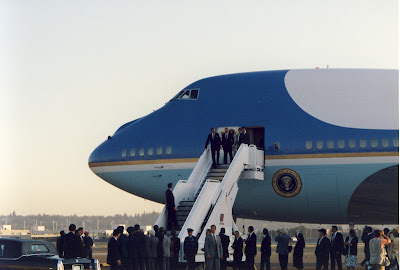