After a hearty breakfast we loaded up the Trailblazer with all the supplies we might need and headed off to Home Depot. 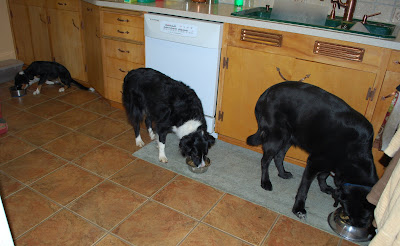 This is the first time I have ever been in a store. The Duke and Duchess thought maybe I could be a good example for Mister Higgins, so Bear and I got to go along on this outing. Doesn't the Duke look like he's having a great time with 3 dogs? Hmmm...... Not so much??? 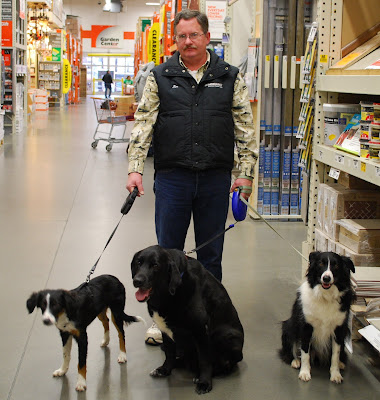 The first thing Higgins did was to poop in the main isle of the store - right there in front of EVERYONE! I was horrified, and rightly so - because it was MESSY! (oh, and it didn't smell very nice either). The Duke was also horrified and the Duchess had a hard time containing her laughter. Go figure. Fortunately the Duchess had a "mess kit" in her purse and cleaned up the entire mess and then finished it off with a Lysol sanitizing wipe. The store clerk was quite impressed. However, she requested that the Duchess please use the garbage can outside of the store to deposit her "doggie bag".
So, we continued on, and the Duke decide we really needed to get off the main isle. We headed down the isle with the shiny new toilets and Higgins took that as his cue to squat and leave a huge puddle in the middle of the floor. We all thought the Duke was going to faint! Again, the Duchess cleaned up the mess - all the while laughing uncontrollably. She had tears running down her face. (What on earth is so funny about pee, I'll never know).
The Duke needed some kind of bolt thingy for concrete, and as soon as he found them we high tailed it out of there! The lady at the check out was so nice. She gave us all treats and Mister Higgins was really pushy. What a brat! 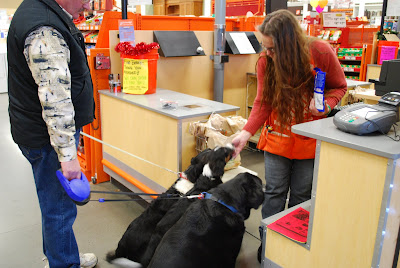 He just would not leave. I was embarrassed to no end! 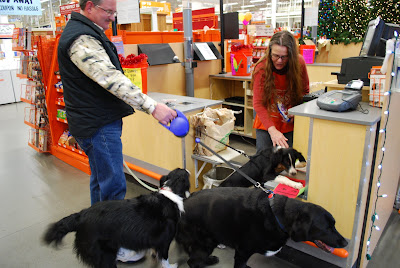 After we finally got him out of the store and into the car, we headed to Petco for another outing. My leash broke right before we left the house so I needed a new one. I was leery of Petco. There were big bright things in the air and little varmints crawling around in cages and behind glass. It was a bit spooky for me but I soon got used to it. Nothing bothers Sir Bear - he's just a big doofus. (I say that in the most loving way, you know). Mister Higgins was pretty good when he wasn't pulling pig ears off the shelf. But again, when it was time to leave and the nice girl gave us treats, he was a total hog! He wanted my treat, and Bears treat and his own treat. And then he begged for more. What a complete PUPPY this kid is. The Duchess promised me that someday he will be a wonderful and well behaved young man. (When? Please?) 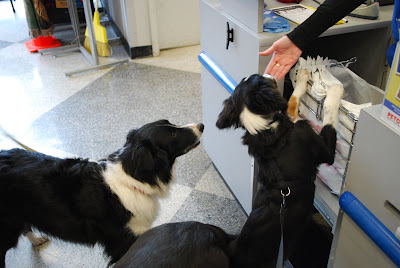 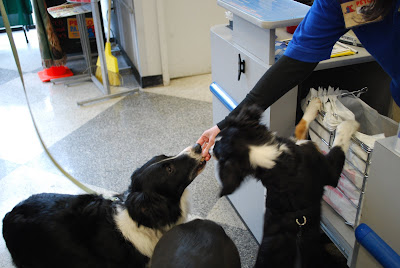 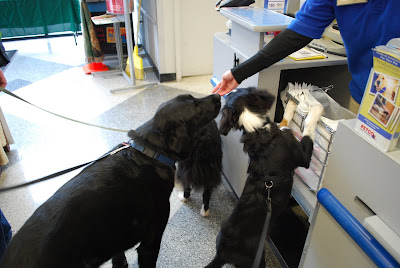 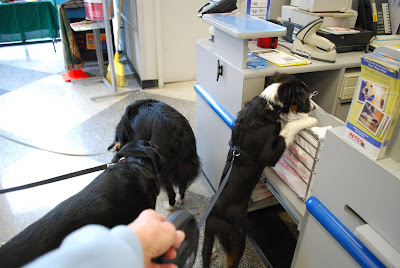 After Petco we headed back home again so Mister Higgins and I could enjoy some play time. Do you see me in these pictures? NOT! He is so stingy with his ball. Beside that, I don't even like to play ball! 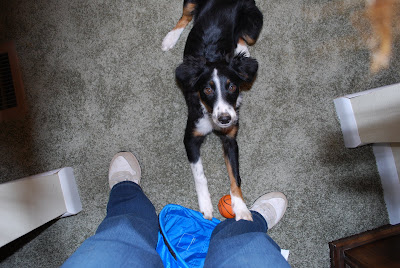 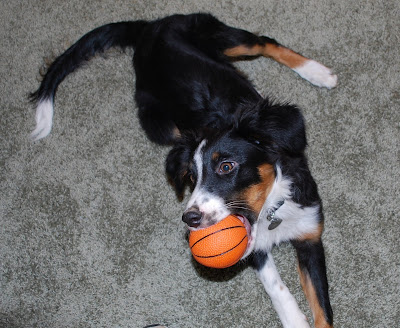 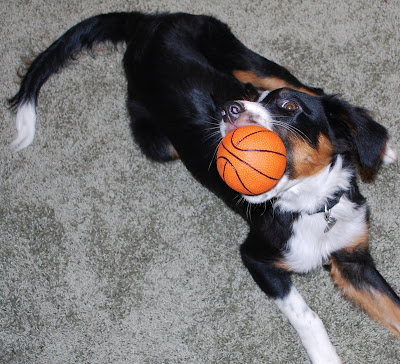 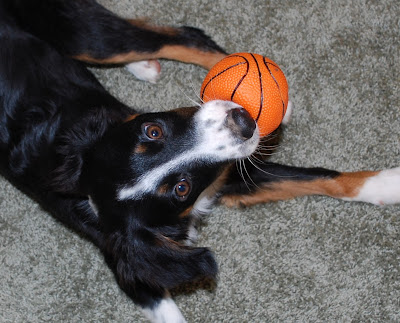 I am seriously doubting my Duchess when she says he will really grow up some day. . .
Send help! 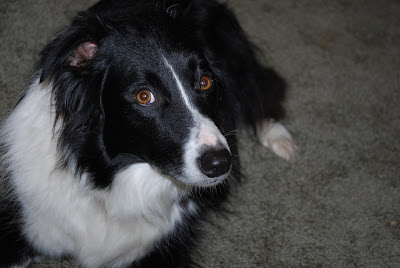 In the meantime, we have other things to worry about. I went to the Vet because I have been vomiting - dry heaves. The vet made me change to a "sensitive stomach" food and Pepcid AC twice a day. If that doesn't work I will have Xrays and blood work next. My Duke and Duchess are pretty concerned for my welfare.
Bear went to the Vet because he has been drinking gallons of water and having accidents in the house - which he NEVER does. $200 later he is doing a little better but we don't know what is going on yet. The duchess has to get an early morning "sample" on Saturday to take in to the Vet for tests. I told the Duchess it's that little bratty brother that is making us all sick and she just laughed at me. Can you believe that? Humph! Anyway, I will keep you updated with any news as we get it.
Kisses,